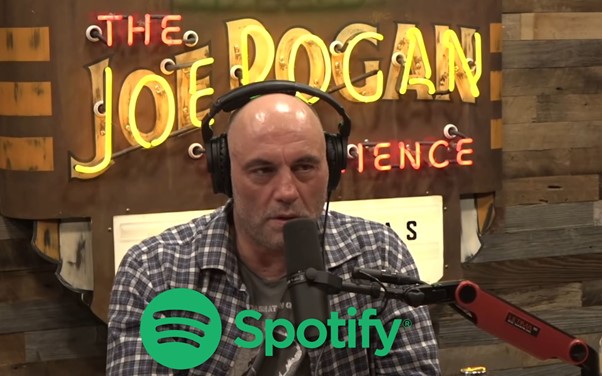 Joe Rogan stunned fans around the world when he announced his podcast, the Joe Rogan Experience, would be moving exclusively to the streaming platform Spotify in 2020.

Spotify, already leading the market as the largest music streaming service,  also wanted to challenge Apple and Google as podcast hosts. To do so, they went after arguably the biggest podcast in the world.

In May 2020, after months of negotiations, Spotify had locked in the 54-year-old and the ‘JRE’ to a three and a half year contract with the option to extend. It was initially reported to be a deal worth $100 million, but NYTimes.com revealed the fee was closer to $200 million.

The controversy began soon after in early 2021 when a compilation of Joe Rogan went viral online. The video in question was five minutes of multiple different instances where the MMA enthusiast had used racial slurs like the N-word in previous episodes of his podcast.

This caused an outcry from the public who demanded that Spotify terminate their partnership with Rogan. Daniel Ek, the co-founder of Spotify, released a statement to the New York Times, condemning Rogan’s language but maintained they would not be removing him from the platform.

“I do not believe that silencing Joe is the answer…We should have clear lines around content and take action when they are crossed, but canceling voices is a slippery slope.”

Joe Rogan himself put a video on his Instagram, apologizing for his language:

“I know that to most people, there is no context where a white person is ever allowed to say that word, nevermind publicly on a podcast, and I agree with that now. I haven’t said it in years… But for a long time, instead of saying the ‘N-word’, I would just say the word. I thought as long as it was in context, people would understand what I was doing… It’s not my word to use and I’m well aware of that now. But for years I used it in that manner. I never used it to be racist because I’m not racist.”

Many MMA fighters and fans came to the defense of Rogan during this time, reaffirming that the UFC color commentator was not a racist. UFC middleweight champion Israel Adesanya made headlines at the UFC 271 press-conference when ‘The Last Stylebender’ defended the 54-year-old.

The controversy surrounding Rogan and Spotify also continued in 2021 due to COVID-19. The pandemic, which has dominated major news and media since 2020, has often been a topic of discussion on the ‘JRE’. Rogan has welcomed a host of guests which includes scientists, doctors and MMA fighters etc and often all have shared their opinions on the virus.

Due to the size of the podcast and the sheer numbers of its audience, Rogan faced criticism from health professionals for the spread of COVID-19 misinformation. This latest storm led to musicians such as rock music icon Neil Young demanding his entire music library be removed from Spotify. Other artists such as David Crosby, Stephen Stills and Graham Nash also followed suit, putting out a public statement supporting Neil Young and pleading with Spotify to take action.

Although Spotify had reportedly instructed all its major staff to decline any interviews regarding Joe Rogan, the streaming service did respond. 113 episodes of the ‘JRE’ were removed from the platform with fans believing those episodes contained Rogans’ use of slurred language and contentious COVID-19 conversation.

Despite the seemingly endless controversy, the Joe Rogan Experience remains one of the largest podcasts in the world. It is estimated that each episode of the ‘JRE’ is streamed by over 10 million people in over 92 different countries, with its largest audience being in the United States