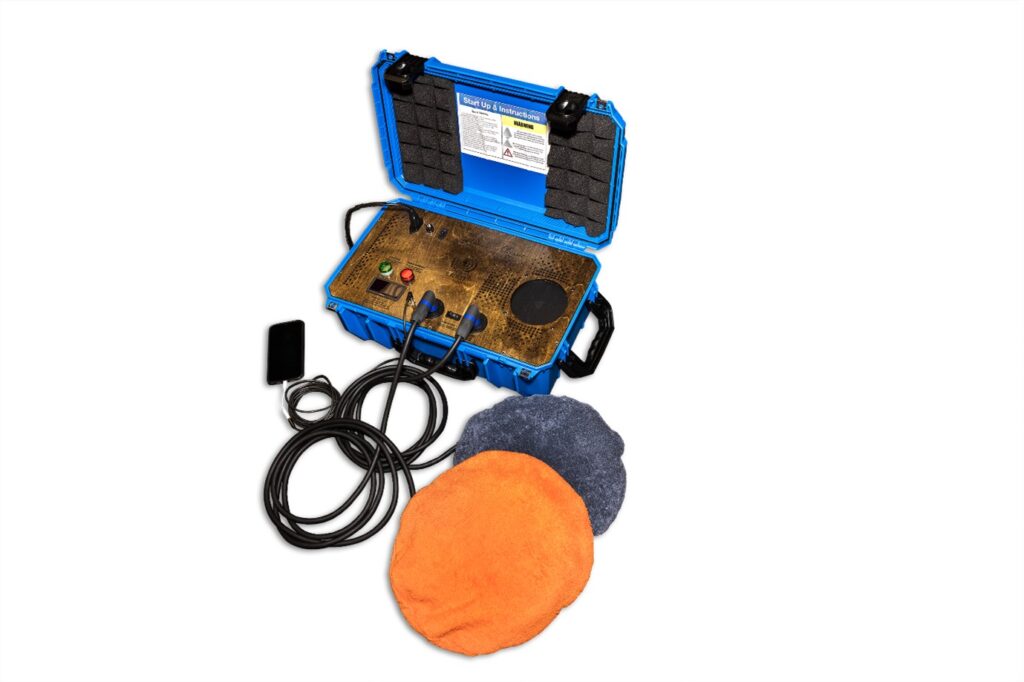 The three main elements of time-varying or pulsed magnetic fields are frequency, intensity, and waveform.

Cycles per second is used to measure electromagnetic field frequency (in Hertz [Hz]). Wavelength and frequency are related.

Although a few systems can produce frequencies higher than these, the majority of pulsed electromagnetic field (PEMF) systems use low frequencies and long wavelengths, ranging from 1 Hz to approximately 10,000 Hz.

Different cellular types, organ systems, and pathologies all communicate in various ways, generating their own biological windows that produce or react to particular frequencies.

Beta, alpha, theta, and delta are the four recognized and frequency-specific brain wave states. Entraining brain waves to coincide with an external stimulus is known as brain wave entrainment.

The most frequent external stimulus used in meditation is sound; however, there is a lot of evidence on using magnetic field frequencies to synchronize brain waves. For example, exposing the brain to a PEMF signal in the beta band (13-25 Hz) will probably lead to a larger percentage of the brain to synchronize with that frequency, causing the body as a whole to become more attentive.

As long as they fall within the frequency range of the brain wave states, frequencies applied externally to the brain can still entrain brain waves. The responsiveness of that specific body and the signal’s intensity both affect how well they entrain.

Benefits may occur throughout a much larger band of frequencies, although some studies have suggested using particular frequencies to treat certain illnesses.

In some circumstances, it is best to use a wide range of frequencies for the body so that it has an option to select the frequency that it wants to accept and reject.

Therapeutic PEMF devices do not hurt the body because all of the frequencies they include are nonionizing.

The vast majority of PEMF devices for sale on the market are of very low intensity. There may be systems with higher intensities than others, but not with a strong magnetic field.

An MRI machine, for example, produces a truly high-intensity magnetic field—between 20,000 and 60,000 gauss (or 2 and 6 Tesla) depending on the machine and application.

In contrast, PEMF systems often reach their maximum output in the 2000-4000 gauss range. Many do not approach even 1 gauss in intensity and can still be useful in the appropriate circumstances.

Irrespective of whether a PEMF has strong or moderate intensity, the body will absorb it completely. The difference lies in the amount of charge the field induces in your tissues as it moves through your body.

Magnetic fields of less than one-tenth of a microTesla, or a thousandth of a gauss, are created by the body itself. A wide variety of magnetic field intensities have an effect on how human biology behaves.

A local charge is still induced in the treated tissues by weak magnetic fields, such as those below 1 gauss, but the charge is much less pronounced than it would be with a stronger field.

More intensity can occasionally overpower the body’s fundamental functions, especially if the patient is exceedingly toxic or sensitive to external magnetic fields, drugs, or other forms of treatment.

Because they are like a whisper in the body, extremely low-intensity magnetic fields typically require more specialized frequencies or a wider range of frequencies.

Because natural cellular communication occurs at incredibly low intensities, only a little amount of extra energy is required to support and enhance several fundamental cellular operations.

Overall, people who are in generally good condition and need basic health maintenance frequently use extremely low-intensity systems. They are also suitable for those who are hypersensitive to drugs, toxins in the environment, or electric or magnetic fields.

Greater charges are induced in the treated tissues by stronger magnetic fields, such as those over 5 gauss. There are diseases and ailments in the body that just cannot be treated with anything other than a strong magnetic field.

Primarily, musculoskeletal diseases and many chronic conditions will require greater intensity fields to generate measurable benefits in a reasonable amount of time. High-intensity magnetic fields are also more ideal for people with bigger body masses, as well as athletes, biohackers, and the like.

Electrical stimulation, which has long been used therapeutically for everything from fracture healing to treatment-resistant depression, is the “cousin” of high-intensity magnetic fields.

They can create significant and quick changes in the body because they cause a measurable charge in the treated tissues. However, PEMFs often have a deeper physiological effect.

Waveforms have a wide variety in nature, the human body, and PEMF devices.

There are many different ways to design PEMF devices, but the most popular ones are sinus, sawtooth, and square. There are also trapezoidal, rectangular, impulse, triangular, and many other options.

It’s crucial to remember that there is a great variety of variance inside each ill-defined waveform. Therefore, there isn’t a simple sine wave, for instance.

Some producers refer to a NASA square wave, which is a square wave identified by NASA. However, it is different from all other square waves and was only identified during the initial NASA investigation, which was conducted more than 10 years ago.

Therefore, although many PEMF systems generate square waves, none of them exactly match the NASA square wave.

Waveforms are significantly important primarily because they either replicate (enhance) or oppose (diminish) physiological activities. Waveforms also frequently correlate with intensity; for example, square and trapezoidal waves are frequently used at higher intensities than sinus waves.

PEMF frequencies can be divided into two categories: below 100 Hz and above 100 Hz:

“Cell signaling” frequencies, or frequencies below 100 Hz, are useful in treating diseases that start inside the body (breakdown of normal body functions). They instruct your cells to carry out actions that would normally take place if your bodily systems were functioning properly but aren’t for various reasons.

Numerous factors including a weakened immune system, an improper diet, an accident (such as a broken bone), the environment, and many others may contribute to this.

This spectrum of frequencies can help with better blood flow, better digestion, lowering inflammation and discomfort, and repairing body systems that are not irreparably damaged.

For instance, PEMF therapy at 76.6 Hz for bone repair has been approved by FDA. Although there are various frequencies for cell signaling or healing above 100 Hz, the most fundamental and all-encompassing ones are in the range of 100 Hz and lower.

Because the earth produces a wide range of frequencies, it is crucial to understand the frequency. Your body’s cells react differently to various frequencies.

Your brain uses electrical signals to function. Different nerve cells respond in different ways when exposed to different frequencies. The same is true for the treatment of different diseases.

It is possible for a PEMF flux with a wide frequency to affect millions of cells. PEMF frequencies are in close proximity to the earth’s natural frequencies, which helps the body heal itself more effectively.

Which PEMF frequency is best for me?

This is a difficult decision to make. For PEMF devices, there isn’t a universal process. The effectiveness of a device is determined by a number of factors in addition to frequency. Other factors to consider include intensity, wavelength, etc.

According to studies, PEMF is most effective when used at low frequencies with particular intensities and waveforms. High intensities work well with low-frequency ranges of 6-500 Hz to produce the required biological effect.

The low-frequency radiations neither heat nor ionize in nature. Typically, radiation of 100 Hz at magnetic flux densities between 0.1 and 30 mT is used in clinical settings.

Another crucial element for the efficiency of PEMF is waveforms.

The radiations have various waveforms, including sinusoidal, quasi-rectangular, asymmetrical, and rectangular. Every waveform has a distinct profile of effectiveness.

For treating fractures, for instance, quasi-triangular and quasi-rectangular are preferred.

The following combinations, according to the majority of PEMF users, are most effective:

Which combination suits you the best?

This can be decided depending on the condition and the body area you want to heal. For instance, a low-intensity field would be less effective in treating fractures as they are covered in a thick layer of skin.

In other words, there isn’t just one ideal frequency. For various conditions, different people use different frequencies. There isn’t a single frequency that works for everything.

One frequency may be quite beneficial for some patients while fail to work for others.

Furthermore, it is untrue to claim that only earth-based frequencies (7.8 Hz) should be used. The earth emits various frequencies (1-100 Hz). The human body can profit from each of these.

PEMF frequencies and duration of each session

The frequencies that patients may use for various health issues are detailed in the following chart.

As you can infer from the table above, PEMF therapy has a wide variety of applications, and each has a particular frequency that is known to be most effective.

PEMF therapy is effective for treating various diseases and disorders.

Sleeping on a PEMF mat, for instance, may require an even lower frequency than mentioned in the chart above. People with chronic conditions may find that long-term exposure to lower frequencies can help improve their condition or symptoms.

You can always talk to your doctor or physical therapist to learn more about how PEMF therapy has been tested and used to treat your particular symptom or condition if you are unsure which frequency is best for you to use.

They will also be able to advise you on how to use your particular device to its fullest potential.

The majority of ailments may be treated using frequencies between 0 and 32 Hz as shown in the chart; thus, a machine that emits pulses higher than these ranges is not actually necessary for home use.

The fact that the earth’s natural magnetic waves and fields also fall within these ranges shouldn’t come as a surprise because it further supports the idea that our bodies and the planet are inextricably linked.

PEMF is a fantastic supplement to many conventional medicines for all types of degenerative and autoimmune disorders that generate excessive amounts of inflammation in the body, as PEMF is efficient at reducing inflammation and pain.

PEMF therapy also enhances the healing process in general from an illness, accident, surgery, or other condition, as it may restore healthy circulation and allow cells to renew and mend.

Even the normal aging process is slowed by PEMF therapy, which has numerous important advantages.

You can use PEMF therapy to treat everything from neurological disorders to joint troubles and from mental health issues to chronic diseases because PEMF energy can safely influence all body tissues.

Why is Sentient Element PEMF device the best?

Sentient Element is also featured in MedicalNewsToday as the PEMF machine with the best frequency ranges.