It would be a great understatement to say that our world has changed a lot due to the Covid-19 pandemic. As the virus has been spreading day by day it has affected most of our daily life routines in a negative way that includes our working, learning, and interaction with others.

But in this pandemic media plays a great role in providing entertainment to the people who are bored of social distancing. Most people start following the accounts that seem to be according to their interests. Today, we are going to discuss a great personality who has been covering every social media platform with his skills and personality. 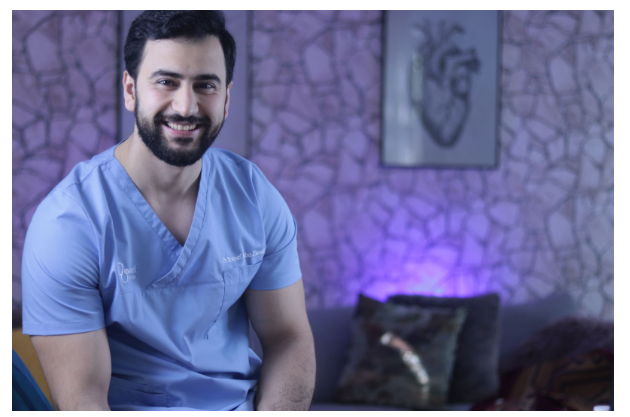 Without making much suspense, let’s meet the rocking and most searched 31 years old personality, Doctor Yousef Abo Zarad. There was a time when Dr. Yousef Abo Zarad was not known by anyone and he did not exist on any social media platform. But time changed and now only a few people in the world don’t know him.

This was not because of his luck or coincidentally he got so much popularity but there hides his hard work of many years. There was a time when he had nothing but a single diploma in his hand and he had to make his whole career based on that diploma. It would be a very stressful moment for any person to have nothing in a city like Germany.

But at that serious moment, Doctor Yousef knew what to do and how to manage his life. Talking about the starting life of Doctor Yousef, he was brought up in a Muslim family in Syria. His father Mustafa Abo Zarad was a hardworking, honest and caring pediatrician. Now, you will know why Doctor Yousef was so obsessed with the medical field.

Once, he makes it clear in an interview that the reason that makes him firm to be a doctor like his father is the behavior of Doctor Mustafa with their patient. We know that being a doctor can be stressful sometimes and due to night shifts, a doctor can sometimes act harshly but Doctor Yousef’s father has no such behavior in himself.

The same thing was inherited from Doctor Yousef and lots of people are still amazed at how such a busy person with a tough routine can be relaxed and so calm. Back to the early Life of Doctor Yousef, he was in high school when his class fellows named him ‘Doctor Yousef’ because of his father’s profession. But no one knows that the name given by a fan can be proved to be real and he can be a more famous doctor than his father.

He was very interested in the medical field from childhood hence he and his family decided to enter him into the medical field. He completed his six years degree in medicine in Syria from Al-Baath University in the year 2008 and was appreciated for having excellent grades. He didn’t stop here but searched for other platforms where he can consume his skills.

But unfortunately, he had to leave his dearest homemade Syria because of the ongoing war and his family decided to shift to Germany. There, he received his German Certificate of Amendment and his medical certificate was also converted to German. The real struggle of Doctor Yousef started from here as he had to start his career with only a diploma degree.

But he was a man of determination and great personality so Instead of losing heart he paid extra attention to his field and became an orthopedic surgeon. During this period, he treated lots of emergency patients and also did several night shifts. Moreover, he did his best in cosmetology and dermatology and keeps on brightening his career in this field.

Being a doctor is not an easy task and especially when you are consuming your efforts on more than one platform. But the amazing fact is that the tough routine doesn’t stop Doctor Yousef from stepping into social media. The place where no Doctor Yousef exists has now a great demand for him and he has followers more than other doctors in the world.

The first YouTube video uploaded by Doctor Yousef was liked by lots of followers and he succeeded in getting more than one million followers in less than a year. Although, he didn’t like TikTok still he uploaded his first TikTok video in May 2022, and amazingly he was also liked by the TikTok family.

Now, he has about 1.5 million subscribers on youtube, 1M on TikTok, 410k on Instagram, and 1.1M on Facebook. He uploaded different videos of techniques and info related to height, skin, health, and weight, etc. Social media is full of such hardworking personalities that are providing entertainment to viewers with their content but Doctor Yousef works differently and shares his knowledge and skills with others on his social media accounts.

Moreover, the most interesting thing about him is that he exercises daily even with a busy routine. There is a famous saying by Doctor Yousef that shows his interest in sports

Hence, you will see how fit he is in his thirties. Talking about the family of Doctor Yousef, he has a very caring mother and a supportive wife. He considered his brother as his second hand and strength as he was always there when doctor Yousef needed him. At every stage of his life, he was always supported by his family and the support of family is very important while making a career.

The above discussion about Doctor Yousef Abo Zarad shows how powerful, hardworking and steadfast he was. The life of Doctor Yousef is inspirational for those who have lost hope because of any issue and think they can’t have success.

If a Syrian Refugee person with only a university degree can be a popular influencer Dermatologist then why can’t you? The social media appearance of doctor Yousef is a helping hand for lots of people and he is also an encouraging personality for all of them.