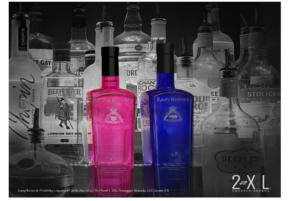 Robert Tushinsky is an entrepreneur with a knack for coming up with new ideas and the aptitude to see them through. He recognizes previously unrecognized needs and develops a solution for them. He not only aspires to reach new heights but is also willing to take risks for his ideas or products to flourish.

Robert is also a humble individual with a compassionate heart for not just humans but also animals. His company, 2XL Swagger Brands, provides a significant amount of money to help endangered species and the environment. A portion of his earnings is contributed to non-profit organizations involved in such socially conscious initiatives.

Robert is the founder and CEO of 2XL Swagger Brands, a luxurious spirits business established in 2012. He was born to Joseph Tushinsky and Rebecca Del Rio on October 12, 1967. His father, Joseph Tushinsky, is well-known for introducing Sony to the United States market in the late 1950s. He had co-founded Sony/Superscope in 1954.

Alcohol brings people together, but it can also cause problems for your sex life. The desire for functional advantages has skyrocketed across the beverage industry, but the spirit business has stuck to the same old playbook.

Robert believes This is not only a failure to not follow the bigger market trend, but the spirits market also represents a unique and evident opening for a functional drink: libido. It is believed that alcohol can hamper sex drive, so why haven’t the spirits industry been on a mission to fix that problem?

2XL Swagger Brands’ flagship products, EasyRhino® & PinkKitty®, are aimed at men and women and boast a unique flavor profile. You can’t go wrong with its delicious and unique liqueurs! With hints of floral, sweet fruit aromas to satisfy your palette or complement it nicely in cocktails – each of you who tries it is forced to admit that these small bottles offer something for everyone!

These liqueurs are infused with herbs known for their libido and mood-boosting benefits. They bring functionality to space without compromising taste, but it’s not just about what you put into your body! How much pleasure can come from drinking one?

The liqueurs are premium, handcrafted drinks made with some of Mother Nature’s most “Invigorating Herbs” that have been used for centuries. With overtones of vanilla, cinnamon, blood orange, and a Special Blend of Herbs, EasyRhino and PinkKitty Liqueur is undoubtedly a one-of-a-kind spirit.

Robert’s discovery puts his business in its functional benefit domain and meets the desire for gender-specific alcohol products in a market that has been mostly ignored for far too long. His products contain all-natural herbs. Most of all PinkKitty and EasyRhino are about bringing couples together to have an amazing time. When PinkKitty and EasyRhino are involved the possibilities of seduction are endless